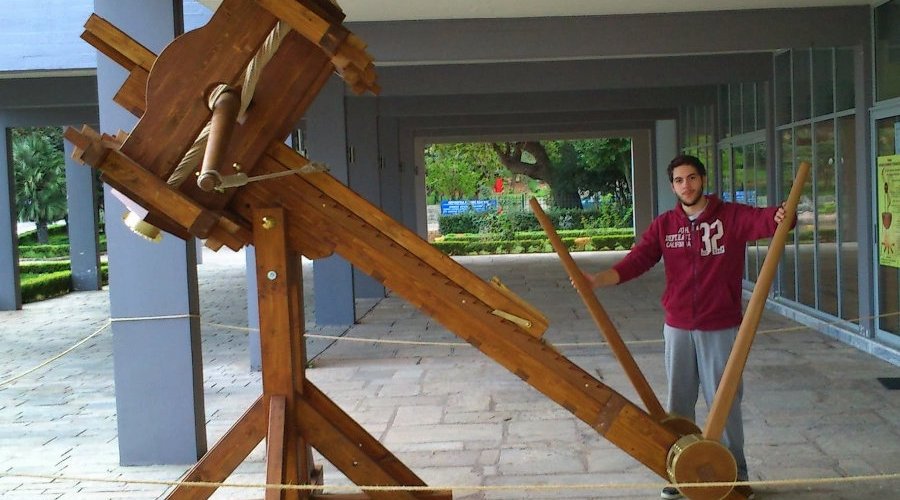 Renowned and without doubt unrivalled to this day, is the contribution of the ancient Greeks to the field of Philosophy and the Fine Arts. Likewise familiar is their contribution to the field of Science. However, the technology of the ancient Greeks is relatively unknown, just as is their incredible performance in this field. The present exhibition of ancient Greek technology includes approximately 300 operating models of ancient Greek inventions. The ancient Greek technological marvel (from the robot - servant of Philon to the cinema of Heron and from the automatic clock of Ktesibios to the analog computer of Antikythera) covers the period from 2000 BC until the end of the ancient Greek world. All were constructed by Kostas Kotsanas, through 22 years of extensive research and study. It is the most credible (since it is based solely on the thorough study of the ancient Greek, Latin and Arabic literature, vase painting information and minimal relevant archeological finds) and the most comprehensive exhibition of its kind worldwide. All the exhibits and their supporting material have been created by the creator of the museums without any subsidy from any public or private institution and are permanently housed at the homonymous Museum of Ancient Greek Technology and the Museum of Ancient Greek Musical Instruments and Toys & Games operating in Katakolo under the auspices of the Municipality of Pyrgos, Greece.

These legacies, identical and irreplaceable, continue today to constitute the building blocks of our modern technology, the development of which would be doubtful without its effortless and undemanding adoption. It simply took over a millennium of maturation for humanity to recover this remarkable forgotten technology. The exploration of this age, when ownership for peak technology was not claimed, demonstrates how much more (than we think) the modern Western Technological Civilisation owes to the Greeks.

The exhibits are accompanied by rich audio-visual material (in Greek and English), such as explanatory labels and giant posters with a lot of information, detailed diagrams, photos and complete bibliographical references, while many of the exhibits are interactive. There are projecting stations with video and animation as well as documentaries in which the exhibitor explains the function and the use of the mechanisms.

The exhibition (categorised in units) follows the modern educational perception in Pedagogic and Museum Education so that it acts multileveled, as far as the greatness of ancient Greek technological thought and technique is concerned, in all levels of the educational community and the wider public. Many of the exhibits and studies, upon which the constructions were based, have been presented at international conferences and exhibitions, while several temporary exhibitions of the museum have been held in both Greece and abroad (from neighbouring Cyprus to distant Australia).

Through the exhibition visitors are given the opportunity to experience the incredible technological achievements of ancient Greeks and discover that the ancient Greeks a) had invented a cinema capable of presenting automatically the story of a myth with moving picture and sound, b) had devised (unfortunately, for entertainment purposes only) automotive vehicles (automobiles) with auto drive, a gearbox, hydraulic programmable valves and other complex components, c) used functional robots in order to serve them, d) had discovered the beginning of the steam engine, e) used sophisticated astronomical and precision measuring instruments (such as an analog computer, a GPS, a theodolite - dumpy level, etc.) that allowed them to calculate, with precision, astronomical and geodetic data, f) had devised ingenious vending machines, g) used sophisticated lifting mechanisms capable of constructing extremely tall structures with only minimal manpower, h) had clocks (and alarm clocks) which operated automatically and continuously without human intervention, etc.

All this demonstrates the high level technology of the ancient Greeks who had almost nothing to envy from early modern technology and that would have led (had the political, economical and social circumstances of the time allowed) to the Industrial Revolution since the Hellenistic era, with unforeseeable consequences for humanity.

The nonprofit transportation of the exhibition (upon invitation) to other locations (in Greece and abroad) will give both Greeks and foreigners the opportunity to admire the completely unfamiliar aspect of the ancient Greek culture; their incredible technology.