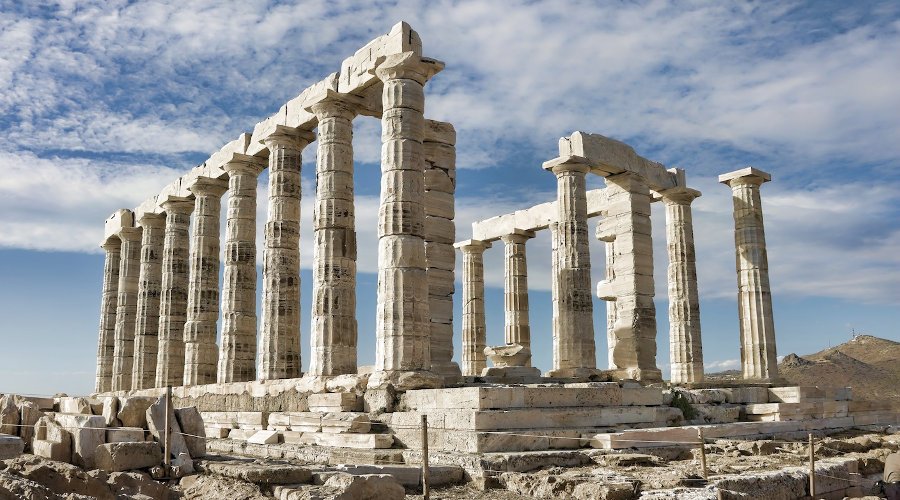 For those of you that would be interested in seeing the southern districts of Athens, as well as in enjoying one of the most beautiful coastal drives in the country, this tour is one of your best options.

On your way you will pass through some of the most beautiful suburbs of Athens right next to the sea, like Faliro, Voula and Vouliagmeni which is also famous for its underground lake.

Entering the windy road by the Saronic Gulf you will enjoy the drive next to the sea, passing several villages, little islands and areas that are mainly consisted by summer homes of the Athenians, with exceptional architecture.

Before your arrival to Cape Sounion, you will have the view of the remaining standing columns of the temple of Poseidon, from quite a distance. This was why in the past, sailors used to call the port next to it "Cavo Colones", meaning the port with the columns, which was also helping them find their way towards Attica. You will make a short stop for photos with the nice background of the temple of Poseidon.

When you arrive in Cape Sounion, you will be able to walk all the way to the top where the temple of Poseidon is and take photos of the breathtaking view all around you. When the atmosphere is clear, you can see in the distance several of the Greek islands of the Aegean Sea. The Athenians in ancient times built the temple of Poseidon in 444 BC to appease the god of the sea, after having honored Athena so much by building Parthenon for her. Additionally, Athens was a great naval power in the ancient times and their ships used to export goods all over the known world, so it was smart of them to use Cape Sounion as an alternative port, as they also had several enemies.

The cafeteria on top of the cape is also where you will be able to enjoy the marvelous view from, along with a coffee or snack.