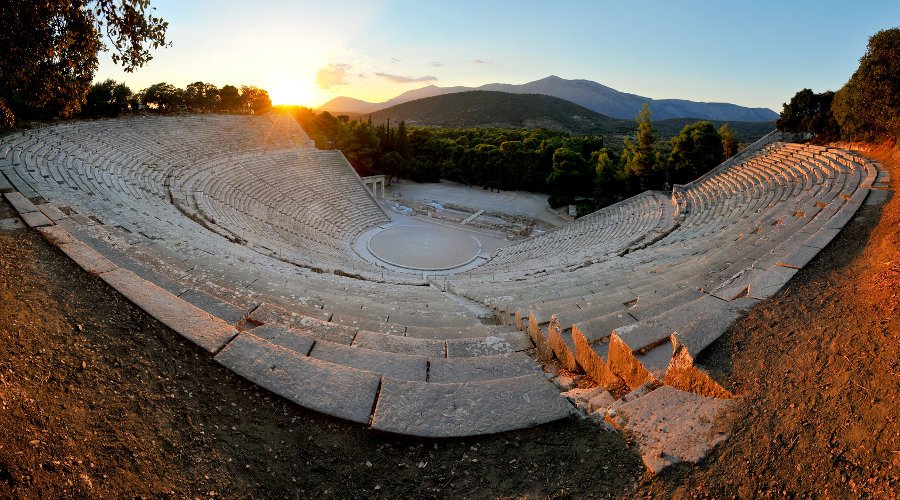 In the peaceful hinterland of Epidaurus, with its mild climate and abundant mineral springs, is the sanctuary of the god-physician Asklepios, the most famous healing centre of the Greek and Roman world. The sanctuary belonged to the small coastal town of Epidaurus, but its fame and recognition quickly spread beyond the limits of the Argolis. It is considered the birthplace of medicine and is thought to have had more than two hundred dependent spas in the eastern Mediterranean. Its monuments, true masterpieces of ancient Greek art, are a precious testimony to the practice of medicine in antiquity. Indeed they illustrate the development of medicine from the time when healing depended solely on the god until systematic description of cases and the gradual accumulation of knowledge and experience turned it into a science.

The area was devoted to the cult of healing deities since Prehistory. A Mycenaean sanctuary dedicated to a healing goddess stands on the Kynortion hill, northeast of the theatre. It was founded in the sixteenth century BC over the remains of a settlement of the Early and Middle Bronze Age (2800-1800 BC), and functioned until the eleventh century BC. Unlike other sanctuaries of this period, it is unusually large. This early sanctuary was replaced c. 800 BC by another, dedicated to Apollo, a god with healing abilities, worshipped here as Apollo Maleatas. The worship of Asklepios, the sanctuary's main healing god, traditionally considered as the indigenous son of Apollo and Koronis, granddaughter of Malos, king of Epidaurus, was established in the sixth century BC. Asklepios, protector of human health and personal happiness, was a very popular deity with an ever-increasing number of worshippers. The sanctuary at Kynortion was quickly overwhelmed by a great number of visitors, so a new sanctuary was founded in the plain, approximately one kilometre northwest of Kynortion Hill, on the site where, according to the myth, Asklepios was born. The two sanctuaries, one dedicated to Apollo Maleatas and the other to Asklepios, were subsequently known under the common name of 'Sanctuary of Apollo Maleatas and Asklepios'.

The new sanctuary developed around the Sacred Well, which was later incorporated into the portico of the Abaton, and in the area of Building E, where the first ash altar and the site of ritual feasting were located. The well played an important role in the healing process, which included cleansing and enkoimesis, or hypnosis, of the patients near its waters. The enkoimesis emulated the periodical death and rebirth of divine powers after they returned inside the earth - the source of life. The god appeared to a patient during his enkoimesis, which corresponded to periodic death, advising him on the treatment he should follow.

Continuous warfare and misery in the fourth and third centuries BC led people to seek even more the protection and help from Asklepios, the philanthropist god, making the sanctuary one of the richest of its time. Several important buildings were erected in both the mountain and plain sanctuaries during this period: the Classical temple, the altar of Apollo, the Great Stoa, the priests' residence and the Temenos of the Muses in the former; the temple of Asklepios, the Abaton, the Tholos, the theatre, the stadium, the Banqueting Hall and the hostel in the latter. The Asklepion suffered from the raids of Sulla and of Cilician pirates in the first century BC, but flourished again in Imperial times and particularly in the second half of the second century AD, when the Roman consul Antonine financed the refurbishment of old buildings and the construction of new ones. Pausanias visited the sanctuary and admired its monuments, which he described in detail (2, 26), during this period. In the following centuries the sanctuary was razed several times and suffered particularly under the Goths in 267 AD. In the mid-fourth century BC, the plain sanctuary was refurbished one last time and a portico connecting many of the existing buildings was constructed at its centre according to Roman fashion. Despite the 426 AD official ban on ancient pagan religions, worship continued in the sanctuary until it was abandoned following the destructive earthquakes of 522 and 551 AD.

The Asklepion of Epidaurus was first investigated by the French Scientific Expedition of the Peloponnese in 1829. P. Kavvadias of the Greek Archaeological Society excavated the site in 1870-1926, uncovering the sanctuary's most important monuments. Limited excavations were conducted by G. Roux of the French School at Athens in the area of the Abaton and in Buildings E and H in 1942-43, and by I. Papadimitriou of the Greek Archaeological Service in 1948-1951. A. Orlandos undertook the restoration of the theatre in 1954-1963. New excavations by the Archaeological Society are in progress at the sanctuary of Apollo Maleatas under Professor V. Lambrinoudakis since 1974, while a special committee of the Ministry of Culture founded in 1984 under the name of Work Group for the Restoration of the Monuments of Epidaurus (currently Committee for the Restoration of the Monuments of Epidaurus) oversees the conservation and presentation of the monuments in both sanctuaries. Recent work at the Asklepieion has both radically altered the aspect of the archaeological site and provided new evidence for the spatial organization, chronology and use of several buildings.