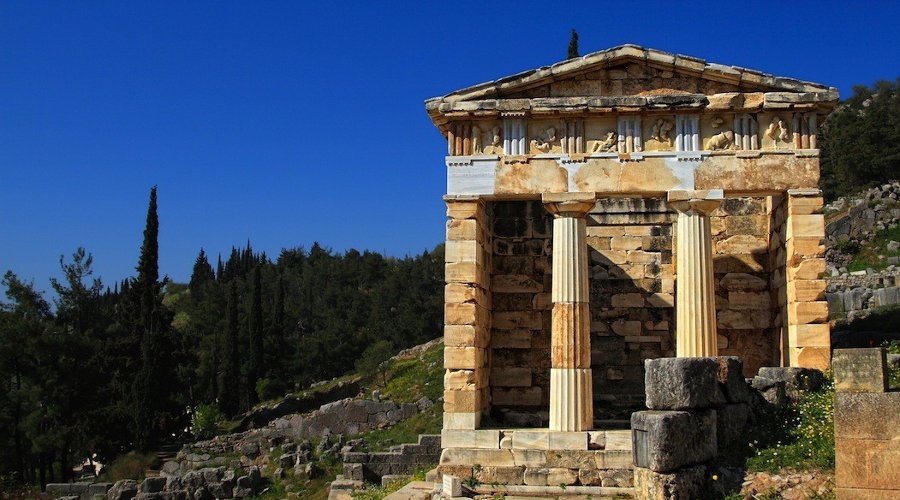 Day 1: This is one of the most popular tours, for travellers that have limited time but still want to explore as many as of the highlights of Greece as possible in three days. That involves long days and driving distances, but still is one of your best options to take advantage of your three days in Greece. Your 3 day tour will start with the drive through the National Highway to the Peloponnese. A stop will be made by the famous Corinthian Canal or else Isthmus that separates the Peloponnese from the Greek mainland, for pictures and coffee. Your journey towards Epidaurus will continue with a 40 min. scenic drive along the coast of the Saronic gulf. On the way your driver will point out for you to see the ruins of the ancient port of Kechries where St. Paul embarked his ship after preaching to the Corinthians to get to Ephesus. Reaching Epidaurus you will have a private tour of the spiritual sanctuary of Asclepius and the theatre with the most famous acoustics in the world. Leaving ancient Epidaurus you will continue with the drive to Nafplion, a picturesque sea port town on the Argolic gulf. This was the first capital of modern Greece; it's a city with beautiful monuments and neoclassical buildings as well as two famous forts Palamidi and Bourtzi, which is located on an island opposite the port. You will be able to stroll around, take pictures and have lunch in the "shade" of the tall neoclassical buildings next to Sydagma square. Continuing your journey in the afternoon you will also drive and visit Mycenae, the centre of power in the late Bronze Age till the 11th century BC. There lies the famous Lions Gate and the Acropolis where Agamemnon was murdered by his wife Clytemnestra and that is where you will be able to explore all of its pathways. Leaving the Acropolis you will also make a short stop by the treasury of Atreus, also known as the tomb of Agamemnon. Then you will start your approximately 3 hour drive to Olympia where you will spend the night.

Day 2: After breakfast, you will finally be able to admire the unique and serene landscape of the Olympia land, surrounded by several hills, filled with pine trees. You will enjoy a private tour through the site-birthplace of the Olympic Games, where still lie the ancient gymnasiums, the temple of Zeus and Hera, the ancient Olympic stadium, the Philippeion, the workshop of Phedias and many more. A few meters away from the site is where you will visit one of the most impressive museums in the world, since it houses the originals pediments of the temple of Zeus and Hermes by Praxiteles etc. Then you will begin your drive towards Delphi, through the large and lush valley of Elis. Along the way you will pass the city of Patras and you will then cross one of the largest suspension bridges in the world that connects the mainland to the Peloponnese. You can then have a short coffee stop in the historical city by the sea called Nafpaktos, in the waters of which the famous battle of Lepando between the fleets of the Ottoman Turks and the Christian Alliance was fought. There you can admire the well preserved Venetian fortification of the small port and the statue of the famous Cervantes, author of Don Quixote, who also participated in the battle there. The rest of your drive will be absolutely impressive since you will be taking the coastal road having the sea on one side and the mountains of the Greek mainland on the other. Continuing your drive along the Corinthian gulf coastline you will pass some of the most beautiful fishing villages. Then you will continue your journey towards Delphi across the largest olive grove in Greece next to the city of Itea, before you start your windy drive, up to mount Parnassus. In the elevation of 600 meters (1800 feet) are built both the ancient sanctuary and the modern town of Delphi. You will spend the night at a hotel in the village of Delphi.

Day 3: After having breakfast you will enjoy a private guided tour through the museum where the famous bronze charioteer is kept, the Sphinx and other well preserved statues and artifacts. You will also be guided at the site where you will see the ancient treasury houses, the temple of Apollo, where the Oracle was, the theatre and the stadium. On the way down you can also have time by the Castalia spring, the gymnasiums and the temple of Athena Pronaia. Afterwards, driving back to Athens you will stop in the picturesque village of Arachova which is famous for the hand woven flokati rugs. Also, if times permits, a stop at the Hosios Loukas monastery can be made. Along the way you will also pass the city of Thebes famous for Oedipus and the battle of Plataea as well as the area of Marathon where the other famous battle of the Medic war was fought in 490BC. Soon after that you will arrive back to Athens and be dropped off at your hotel or the airport.